How to Choose The Best Speaker Wire So what’s the deal with all the different kinds of speaker wire?
There isn’t a more controversial topic in the world of audio.  In one corner, you have the true believers asking incredulously: “What do you mean you can’t hear the difference?  There must be something wrong with your ears.”  In the other corner you have an equally emotional response: “Stop it!  There IS no difference”.

Meanwhile, most audio equipment makers, fearful of offending their dealers who make a lot of cold hard cash selling speaker cables, remain mute.  We aren’t compromised by such concerns, so we’re going to give it to you straight.

This controversy itself is a little hard to understand, considering that it has been so thoroughly researched with scientific studies, precise measurements and double-blind listening tests.  Especially since the overwhelming evidence has all come down on one side.  The results?  People can’t actually hear any difference as long as they follow some simple best practices.  So why does the cabling industry exist?  That’s pretty simple: It’s phenomenally profitable.  It’s definitely in their best interest to make you believe that their magical cables sound better.

It’s a bitter pill to swallow, but no amount of pseudo-scientific features like oxygen-free copper, skin effect, vacuums, dielectric biasing, or cable resonance make any difference at all.  A $50 spool of 12-gauge zip-cord will perform like a $15,000 run of space-age laser wire. If you need a shoulder to cry on or a buddy to talk to, we’re here for you.

So why would I want expensive speaker wire? 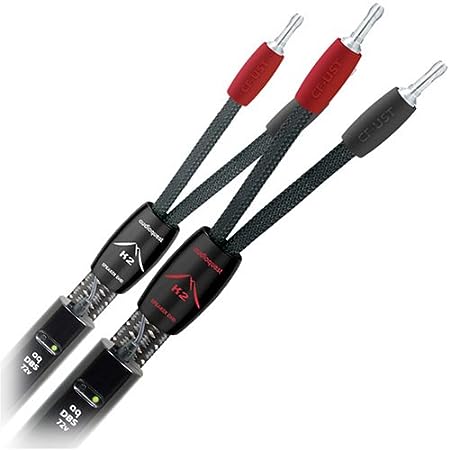 Well, expensive speaker wire typically has the best build quality, it (usually) will make your speakers sound fantastic as all good wire should, and it has the added benefit of being extremely aesthetically pleasing.  If your entertainment center is a showpiece in your home, attractive cabling and speaker wire can be that extra touch that makes your home theater truly shine.  For more on the subject of who needs expensive audio cables, check out this article from our friend Steve Guttenberg.

What DO I need to consider?

Well, just because we think you shouldn’t spend too much on speaker wire doesn’t mean there aren’t some things you should consider.  What you’ll want to pay attention to is the one thing most likely to make a difference: electrical resistance.*  Lower resistance is better and three things affect it: the wire’s conductivity, length, and thickness.

Copper is cheap and a great conductor, so almost all speaker cables are made from it. Any advantage gained by using a better conductor can easily be compensated for with slightly thicker wire.  So fortunately, we can ignore this and concentrate on length and thickness.

Twice the wire length gives you twice the resistance.   This means that you’ll need either more amplification or a wire with better resistance to get the same sound as a shorter run of wire.  That’s all there is to it.

Thicker wire results in lower resistance. This is good.  A wire’s thickness is measured in gauge (AWG), with a thinner wire having a bigger gauge number.  When the wire’s gauge increases by three, its cross-sectional area will be halved and its resistance doubled.  As an example, 12-gauge wire will have ¼ the resistance per foot of 18-gauge wire.  So lower gauge wire tends to be better.

OK, I think I understand – now which gauge wire should I use?

The first thing to know is that getting heavier wire than you need won’t hurt anything, but because it costs more and is harder to hide, you probably want to know what the thinnest wire you can get without compromising your sound.  Here’s how to choose speaker wire?

Wire and Cable are an essential part of your home entertainment system, without them, your speakers are nothing more than gigantic paperweights.  With a little thought, consideration and preparation – you can achieve affordable performance that rivals the most expensive speaker systems.

* If you know a thing or two about electrical theory, you might be curious why a wire’s resistance even makes a difference.  Why wouldn’t it just attenuate the speaker’s output a little bit?  The reason is that most speakers have impedance that fluctuates greatly with frequency.  The amount that wire attenuates a speaker’s output depends on its resistance compared to the speaker’s.  Whatever resistance the wire has will be relatively greater at 200 Hz (for the speaker represented by the graph to the left) than it will at 2000 Hz.  The result is that a speaker’s frequency response will start to morph into its impedance response as the resistance placed in-line (like speaker wire) increases.  If you have a speaker with a flatter impedance response – and some speakers do have much flatter impedances than others – then the resistance of the speaker wire becomes increasingly unimportant.  Isn’t science wonderful?

** This method will get your speaker wire resistance to <3% of your speaker’s nominal impedance for audiophile listening, <4½% for critical listening and <9% for average listening.

For more indepth information on the differences in wire and interconnects, check out this great article and video by Gene DellaSalla from Audioholics.